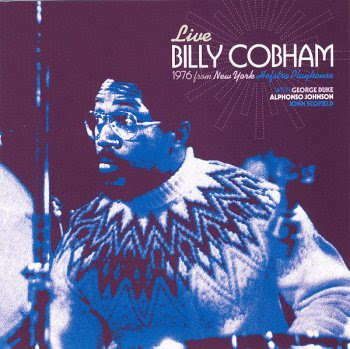 The Gonzo Multimedia label has released a number of Billy Cobham concerts on CD. Each album has a similar cover and is taken from a radio broadcast.

We know by now that most of these so-called 'radio broadcast' albums do not present the best quality audio recordings and, unfortunately, "Live 1976 From New York Hofstra Playhouse" is no exception.
On the other hand, this album does present a superb line-up :
Billy Cobham, George Duke, Alphonso Johnson and John Scofield,
and they play a fabulous set, including Frank Zappa's 'Echidna's Arf (Of You)' and the Duke / Zappa collaboration 'Uncle Remus'.

Email ThisBlogThis!Share to TwitterShare to FacebookShare to Pinterest
Labels: george duke, others of invention, zappa