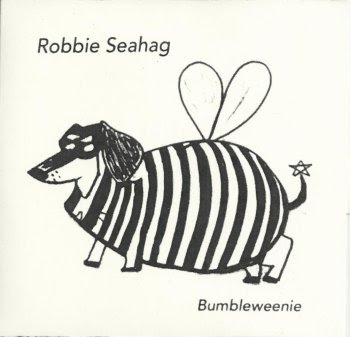 Robbie Mangano's latest album is called "Bumbleweenie". It's a collection of 10 songs that Robbie wrote somewhere between 2004 and 2016. They got recorded, mixed and mastered in September 2016.

Despite what you might expect from Robbie's stunt exploits with The Banned From Utopia, "Bumbleweenie" shows a more modest musician.
The EP presents 10 guitar-oriented pop/rock songs, 10 beautifully crafted pop/rock songs.

Housed in an impressive package, with excellent liner nots, the album was availabe during recent Banned From Utopia gigs. I'm pretty sure that Robbie will make it available for mail-order very soon.