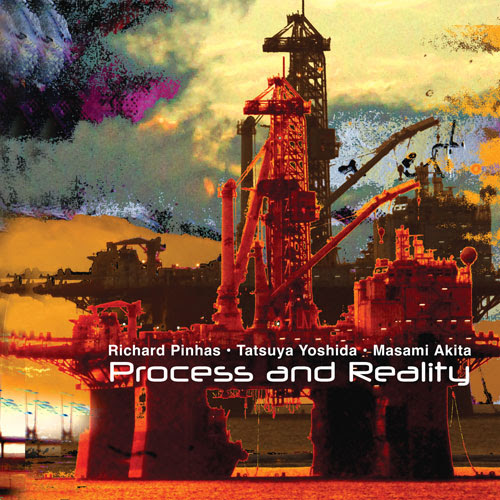 The album includes four tracks of which the second one lasts over thirty minutes.
Experimental.
Dark and heavy.

The info sheet adds :
Process and Reality marks the first recorded convergence of these three avant-rock giants, though Pinhas has recorded with both Yoshida and Merzbow in the past and all three have toured extensively together in Japan . The album, recorded in Tokyo during a recent high-profile tour, captures the fevered intensity and violently textured depth of the trio's collaborative improvisations. The music made by Pinhas, Yoshida and Akita seethes and roils in a constant state of both turbulent flux and visceral realization.

The guitarist says of his collaborators, 'They explore 100% of their possibility. We have the same kind of spirit.' That spirit seems to blanch in the face of the modern age. Though he doesn't regard Process and Reality as the still-to-come third part of his 'Devolution Trilogy,' the album arrives in the midst of an unprecedentedly ugly American presidential election and in the shadow of a series of tragic terrorist attacks in the guitarist's native France. If that's all too downbeat for an evening's listening, Pinhas also sees the album as a celebration of his cherished friendship with these Japanese artists. 'Japan is the best scene in the world,' he asserts, and while he foresees a radical change in his sound approaching in 2017, he continues that, 'Always I will work with my forever friends.'