Landgraaf, NL, was the place to be on Saturday night as the main part of third edition of the Mosae Zappa festival settled at 'De Oefenbunker'.

I was told that the pre-parties (sing-along + DJ on Friday night, and the Saturday afternoon concert by Antoine Putz) had been enjoyed by all, so I was quite curious for the sequel.

Saturday night started with John's Got A Sausage, a project by a bunch of local musicians. The warm-up. Charming.

Next up was The Wrong Object. They played original material and lots of Zappa stuff. They had practiced some new Zappa material as well. This was great. A stunning performance, beautiful arrangements and loads of energy. One word: Wow !

Third in line was Bits From Hell, an exercise with midi files and Zappa music. Nice, but way too close to the original versions. The set could probably have been more powerful if it would only have lasted for 10 or 15 minutes.

And last but not least : The Foolz. Relaxed as always, the guys played a fine selection of Zappa songs. A bit sloppy at start maybe, but I really liked them. The audience loved them too.
Too bad that it got a bit too late and that people started to leave during the show. I did as well.

It was great to see my fellow Zappateers again (from Ireland, England, Sweden, Norway, Germany, NL and BE) and I did attend one superb and half of a fine concert.
Worth the trip ! 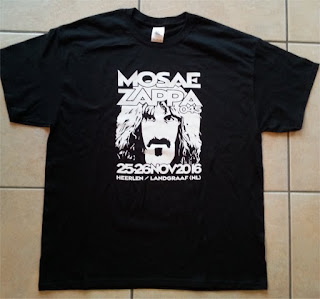