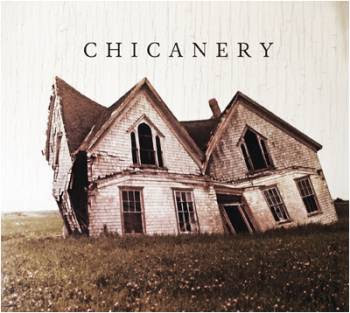 Chicanery is a collaboration between Warren Cuccurullo and Neil Carlill.

Neil Carlill first met Warren Cuccurullo in England in the late 1990s. Carlill was a guest on the TV Mania project that was created by both Cuccurullo and Nick Rhodes of Duran Duran. A number of years after both Cuccurullo and Carlill relocated to the U.S., they began work on "Chicanery".

The band recorded one album, released on dPulse Recordings simultaneously in North America, and Europe on May 2010. Chicanery was made available in CD and digital formats in America, and in digital format initially in Europe.
Guest musicians include a.o. Terry Bozzio and Joe Travers.
The debut single, 'Hubert Selby Song', was released, along with 'Gold Pavillions' as an extra track, on iTunes on April 27, 2010.

There's a fine review of the album in the latest issue of The Arf Dossier.
Haven't heard the actual album yet. Just added the data into the United Mutations Archives.
Geplaatst door UniMuta op 2:18 AM