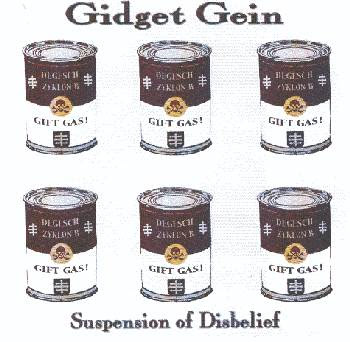 "Suspension Of Disbelief" is the collage of sounds that goes with the "UnPoP Can" artwork which both have been produced by Gidget Gein.

Gidget Gein's alias is a mixture of the title of a novel and the name of a serial killer. (and so is Marilyn Manson's.)
The "UnPoP Can" artwork which is shown on the cover of this album, displays a series of cans that have a label that says "Zyklon B - Gift Gas" (poison gas). The soundcollage on the album is made up of a German speech, march music, animal noises and laughter.

Gidget's art site says:
"This CD is a representation of the sounds Gidget heard somewhere "out there" while creating the Unpop Can painting that is represented on the album cover. No conventional instruments were used in this effort - rather, a Mac computer, antique toys, a gramophone and deconstruction were responsible for making this disc possible."

The album got released in 2007 on the Transparency label.
http://www.myspace.com/michael_transparency

In the following YouTube movie Gidget Gein presented some of his work. There's a nice segment on his UnPoP Can.