Somewhere in 2001, I received a demo of Fast & Bulbous, Phillip Johnston's Captain Beefheart project, that also would feature the great Gary Lucas.
When the band started touring in October of the same year, they performed their first concerts in Italy, Belgium and Germany. I was at the Brugge, Belgium, concert and I still have vivid memories of it. Instrumental Beefheart Jazz. I loved it.

We're ten years later now, and Fast & Bulbous have released two beautiful albums: "Pork Chop Blue..." and "Waxed Oop", both on the Cuneiform record label.
And about a week ago, a digital audience recording of the Brugge concert turned up at The Traders Den. What a nice X-mas present :-)

Here's the link to the entry over at TTD:
http://www.thetradersden.org/forums/showthread.php?t=88217

And here's the cover of the 2001 demo, that I added to the United Mutations Archives at
http://www.united-mutations.com/f/fastnbulbouscbpoject.htm 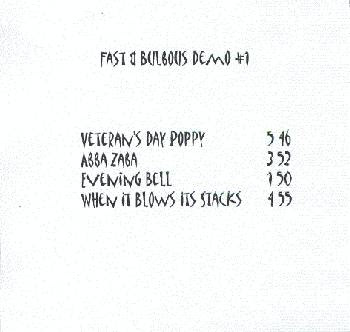