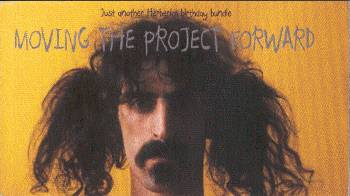 Here's a great little book.
I bought this two weeks ago, and I had never heard of it before.
It's a 9 by 5 cm 'flip-book'.
It's a book with a picture on each page and when you flip the pages very quickly, you get the impression that you're watching a little movie.
And, yes, the 'movie' has Frank Zappa directing his band.

What I really like about this book is that it was dedicated to the late Martin Herberich. I knew Martin. We never met in person, but we used to call each other once every couple of weeks to swap Zappa-related info. The last time we called, he was already in the hospital and he could barely speak, but he did want to have a little chat. A great and generous guy.
I don't know who published this book, but this is something that Martin would have been extremely proud of. Thank you.
Geplaatst door UniMuta op 1:06 AM