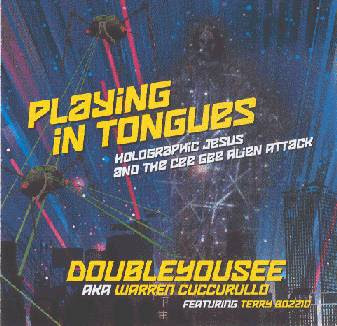 Doubleyousee's (W.C. = Warren Cuccurullo) career does look a bit weird. He played with Zappa in the late seventies, played with The Missing Persons and with Duran Duran.
Warren also has some outspoken opinions on sex, religion, the 9/11 attacks, and more.
His previous solo album dates from 2003, so I was glad to hear that he was working on something new.

"Playing In Tongues" is great. It's subtitled "Holographic Jesus And The Cee Gee Alien Attack", which sort of gives away that this is not your average rock album...

The music on this album is great. This is Warren Cuccurullo doing what he is best at: making music.

Here's a little piece from a 1994 interview with Andrew Greenaway:

AG: In a 1990 interview you described yourself as a "mini-FZ" in the light of your experiences with Missing Persons and DuranDuran. How come?

WC: I'm becoming a maxi-Frank now! His influence is so strong - I find my capacity for work is endless. I've just organized a 15-piece orchestra for a Duran Duran Unplugged show. My experience with Frank is my most valuable asset.

And it looks like Zappa's influence is bigger than ever.
Great music, funny lyrics and hilarious stories.
I have the same feeling with Vai and with Keneally. They're making some great music, and you can tell that they played with, and learned a lot from Frank Zappa.

HIGHLY RECOMMENDED
(released on Zappa records in the U.S.A., and on Edsel in Yurrip)