BIRDSONGS OF THE MESOZOIC - DAWN OF THE CYCADS 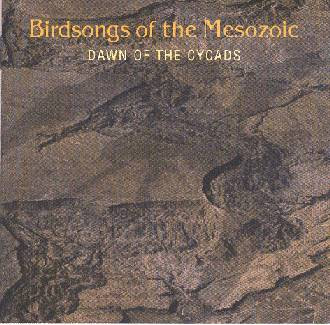 Last year, Cuneiform released "Dawn Of The Cycads", the latest Birdsongs Of The Mesozoic album.
"Dawn Of The Cycads" it's not really a 'new' album. It's sort of a deluxe re-release as it collects the complete Ace Of Hearts recordings with an impressive amount of bonus material. In other words: the complete Birdsongs Of The Mesozoic output from 1983 until 1987:

Audio extras include 3 bonus tracks from the mid-80s, and a very impressive (8 tracks) concert recording from 1987.
Other extras can be found on the second disc: pictures of flyers, posters, setlists, press packages, scores (!!) and more. An archivist's dream.

Describing the music of Birdsongs Of The Mesozoic isn't easy. The themes and melodies sound like contemporary classical music, but are performed on guitar, synthesizer and drums. On top of these themes, you get various movements and/or improvisations.
I like it a lot.

"Dawn Of The Cycads" is the perfect introduction to Birdsongs Of The Mesozoic.
Recommended!

The album is available from: