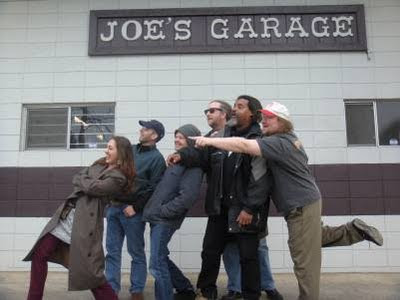 Zappa Alumnus Ike Willis To Tour With Pojama People
8/17/2009 - Eugene, OR - Known for his uniquely identifiable baritone voice, former Zappa alumnus Ike Willis will be touring with Eugene ensemble Pojama People. Willis worked with music legend Frank Zappa from 1978 to 1993, and can be heard on such notable albums as Joe's Garage (he was "Joe"), Thingfish (he was "Thingfish") and Best Band You Never Heard In Your Life (he was "The Walrus"). Vowing to keep the music of Frank Zappa alive, he has teamed up with Zappa tribute band Pojama People for a series of upcoming US shows."
We're going to be doing all the old Frank Zappa favorites, along with stuff from 'Joe's Garage'," says Ike. "Basically, we span all of the eras."
Pojama People features Alli Bach (vocals, percussion, winds, terpsechorean ejectamenta) and Glenn Leonard (drums and "I Was There" musical direction). Rounding out the unit are Portland's Brian Casey (bass) and Ted Clifford (keyboards). Spawned from Zappa tribute ensemble Project/Object, drummer Glenn Leonard (who had played 7 national tours with Project/Object) decided to start his own band to honor the late, great Mother. "I moved from Philly to Oregon in order to marry Alli and start a new Zappa project on the west coast with Ike Willis," Glenn related. "Alli and I met up every time Project/Object played in Eugene, where she would guest doing interpretive modern dance to various FZ songs or improvisations. She joined the tour as a guest in 2004 from Portland to San Francisco where she was featured doing 'The Black Page' on tap! At that point, I knew she was the woman for me. A cross-country romance bloomed and by 2006 I moved to Eugene."
Pojama People have completed five west coast tours since August 2006. Most recently the group released their debut CD 'footsie notes', which is based on improvisations with Ike Willis (who plays guitar as well as sings). "Glenn's our old drummer from Project/Object," recalls Ike. "He was with us for three years. He decided to move to Eugene and start his own band. Also, I lived in Oregon for 17 years. I moved there after the last tour I did with Zappa. Glenn is one of the family, and when he put Pojama People together... when any of my brothers need help I answer the call!"
Pojama People featuring Ike Willis will be performing at the following locations:

Songs to be performed by Pojama People on this tour include: "Dangerous Kitchen" (with Glenn on piano), "The Tap Page" (Alli doing the Black Page via tap dance), "Tell Me You Love Me", "Help I'm Iraq", "Trouble Every Day", "Inca Roads", "Black Napkins", "Outside Now", "Sy Borg", "Watermelon In Easter Hay", "Willie The Pimp", "Zomby Woof", "I'm The Slime", "Lucille" to name a few.
The music of Frank Zappa still remains important to Ike Willis; "I've been playing Frank's music for over 30 years now, and I spent half my life with him. We met when I was 19 years old, when I was in college. I played and toured with him on and off from 1978 on. I recorded with Frank the entire time from 1978 up until he passed away." Along with the debut of the Ike Willis Project this fall, Ike has his three solo CDs available for purchase through http://www.itsaboutmusic.com/
For more information on Pojama People:
www.liveatthespace.com/pjp/
Geplaatst door UniMuta op 5:09 AM