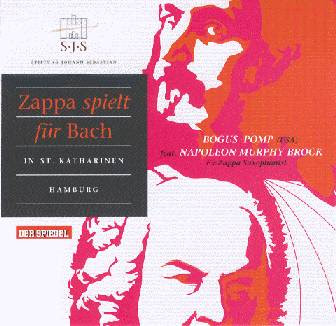 Last week, I told you about the fine Project/Object concert that kicked off my Zappanale trip. Two days later, Tuesday, August 11, had me driving to Hamburg to team up with some friends for the Sheik Yerbouti concert.

To my pleasure, the society that co-organised the concert with the Arf Society, has released last years concert on CD. All in aid for the Bach organ that has be rebuild.
Now, whatever the reason, this is one great release.

I remember that his was a great concert, but that the sound in the church was horrible. Well, maybe not from where I was seated (4th row somewhere), but the people in the back had a hard time with the bouncing sounds...
The sound on this CD, however, is great. No disturbing echoes or noises. This is the clear soundboard.

The choice of compositions is great, and the performance is excellent.