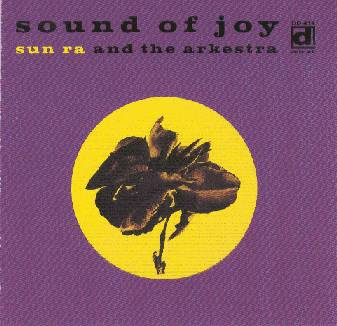 Originally released in 1968, "Sound Of Joy" got re-released in 1994, with two bonus tracks.
The album was originally intended for the Transition label, which did not survive long enough to release it.
Recorded in 1957, it presents some fine, big band jazz.
from Wikipedia:
"Sound of Joy" is an album by Sun Ra and his Arkestra. It features the Arkestral lineup during the last few months of 1956, after trombonist Julian Priester left to join Lionel Hampton, [[Charles Davis (saxophonist)]Charles Davis]] became a regular member of the band, and Victor Sproles took over on bass. It was intended as the follow-up to "Jazz By Sun Ra" but Transition Records ceased to operate before it could be released.
Four of the tracks were included on Sun Ra and his Solar Arkestra Visits Planet Earth, released in 1966. The entire LP was eventually released in 1968 by Delmark Records, who also re-issued Jazz by Sun Ra. Two ballads, written by Sun Ra and sung by Clyde Williams, were left off the original album, however, because the president of Delmark Records, Bob Koester, "felt they didn't fit with the other pieces on the session." The songs were reinstated when the album was re-issued on CD in 1994.
Geplaatst door UniMuta op 2:06 AM