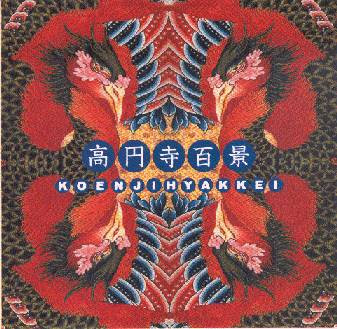 Koenjihyakkei or Koenji Hyakkei is a Japanese avant-garde / progressive rock band.
The music of Koenji Hyakkei is often referred to as Zeuhl, which is a Kobaïan word, and Kobaïan is the language that Christian Vander invented for his band Magma.
In short, Zeuhl is used to describe the music of bands like Magma, Art Zoyd, Univers Zero and Ruins, to name a few. In fact, bandleader and drummer Tatsuya Yoshida was also the man behind Ruins.

"Nivryam" was the band's third album. It got released in 2001 on the Magaibutsu label.
A little while ago, Skin Graft Records re-released the album. The exceptional thing about this re-release is that music was added to the original recording. Present-day members Komori Keiko, Yabuki Taku and AH added sax, keyboards and vocals to the original music.

To be honest, I never heard the original release, but this re-release is mind-blowing.
Angular rhythms and melodies, impressive vocals in a made-up language.
Koenji Hyakkei produces an impressive mixture of very powerful and melodic progressive rock, avant-garde and fusion. Zeuhl, but also a lot of unmistakable Zappa-influences.
Fans of Zappa, Keneally, or Mats & Morgan should really check this out.
Very energetic. I love it.