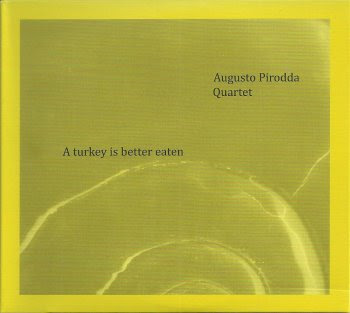 After years of playing with various jazz musicians across Europe, Augusto Pirodda made his first solo record in 2007. The album was entitled "Moving".
2011 saw the release of his second album, "No Comment", with Gary Peacock on bass and Paul Motian on drums. It got released on the German Jazzwerkstatt label.

And now there's "A Turkey Is Better Eaten" for which Augusto invited rhythm section Manolo Cabras on double bass and Marek Patrman on drums. Manolo Cabras hails from Italy and is a long time collaborator of Augusto Pirodda. Czech drummer Marek Patrman teaches at the Antwerp Jazz Academy and has worked and recorded with Erik Vermeulen and Ben Sluys to name two.
Alto sax player Ben Sluys completes the quartet. His lyrical playing style creates the perfect counterpoint to the more experimental approach of Augusto.

"A Turkey Is Better Eaten" is a fascinating album.
Worth checking out.