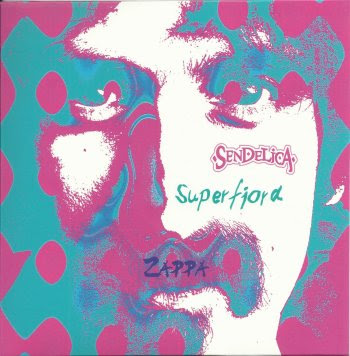 U.K. label Fruits De Mer released this split-7" last month.
Side A has Superfjord performing Frank Zappa's 'Peaches En Regalia', while the other side A has Sendelica with Frank Zappa's 'Don't Eat The Yellow Snow'.

On yellow vinyl, of course.
Love it !!

Superfjord and Sendelica get together to reinterpret two Frank Zappa songs - 'Peaches En Regalia' by Superfjord, and 'Don't Eat The Yellow Snow' by Sendelica; they range from sublime to slightly crazed, and quite right too

over to the bands to explain what they intended....

Jussi Ristikaarto from Superfjord says…"Last summer Superfjord drummer Ilari Kivelä and I used to listen to Zappa’s ‘Hot Rats’ album in the car when driving to rehearsals. Even though ‘Peaches En Regalia’ is such an iconic track that it’s almost up there beyond anything that would be wise to attempt at as a cover -- or maybe exactly for that reason -- we started toying with the idea of turning the song into a Superfjord live tune. First of all, it’s anthemic and fun as f***, and secondly the song is technically challenging in that all-too-alluring “I bet we could pull this off” sort of way. Inspired by this, I think it was me who actually initially suggested a Zappa-themed seven-inch to Fruits de Mer’s Keith, and lo and behold, he was up for it. Thus we were faced with actually having to learn to play the song. We didn’t want to stray too far out from the original, but rather wanted to preserve the bubbly and energetic, almost soundtrack-y vibe of the song, preserving all the essential arpeggios and melodies. Basically we just took the original anthem into a more of an acid-rock ballpark and added a new C-part that acts as a jam vehicle in live situations. We had a whole lot of fun doing it -- here’s hoping Frank digs it as well!”

Sendelica’s Pete Bingham puts his spin on the recording…"When FDM approached us with the idea of doing a Zappa cover this was one of the first tracks that popped up in my mind. Off course, as usual, we then started to think of a twist to give the track - and the idea of a juggernaut, almost Sabbath like, approach to the main riff began to form. We recorded the heavy section at Mwnci studios as a two drummer, dropped 'D' tuning heavy rhythm section. So now the idea of the song being in two parts solidified and we approached vocalist Karen Langley, of Babal fame, with the idea of doing a very minimalist, almost ethereal, first part of the track with us....... and voila.... the two parts melded together seamlessly"