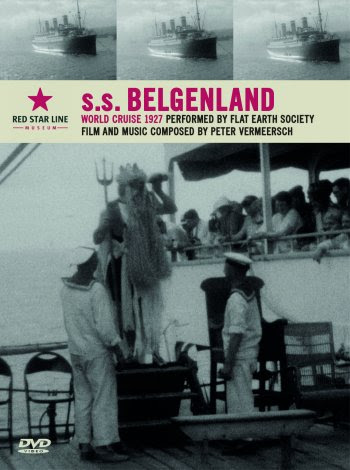 From the Red Star Museum website:
Since the autumn of 2016, the Red Star Line Museum has been drawing attention to one of the Red Star shipping line’s lesser known activities: its cruise activity. The museum will bring the cruise era back to life with an exhibition, a book and a concert by the Flat Earth Society. The emphasis is on the stories of the passengers and crews of the Red Star Line's cruise ships. The exhibition includes an original film shot by an amateur filmmaker during his cruise on the Belgenland between 1927 and 1928.

In the meantime, these concerts have taken place. And, on top of that, the music got recorded at the national radio studios in Brussels.
The outcome is a DVD with 40 minutes of amateur movie (selected by Peter Vermeersch) with an astonishing soundtrack (written by Peter Vemeersch and performed by Flat Earth Society).