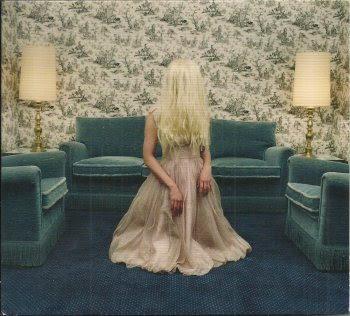 Released as a dowload-only album in 2014 and on CD by the Crucial Blast label in 2015.
I mentioned this album on this very blog around the time that it got on CD but as I was playing it again last week, I thought it needed some extra attention.

"Psychogenic Atrophy".
Well, I guess they could also have called it "Losing (Functionality Of) Part Of Your Body, Caused By Mental Stress Or By Psychiatric Disorder" but that probably didn't sound that catchy.

"Psychogenic Atrophy" is Dimesland's first full album. Or their second if you consider the mini-album "Creepmoon" their first. Or even their third if you start counting with "Land Of Dimes"...

This album featured Nolan Cook, guitar wizard for The Residents, his late brother Drew on guitar, Greg Brace on bass and Harland Burkhart on drums.
The music is hard to describe. It's metal but it is incredibly complex and has these complicated arrangements.
I've heard people call it avant-garde death metal, or even progressive trash.
I wouldn't know what to call it, I just play it loud.

I like it. I like it a lot.
It does need a couple of listening sessions (and the right mood), but it's a very fine album.
Give it a try !