Frank Zappa's "Roxy The Movie" got a screening in L.A. a couple of days ago.
Those who were there (and who shared their comments on Facebook and / or Zappateers) were very enthousiastic. 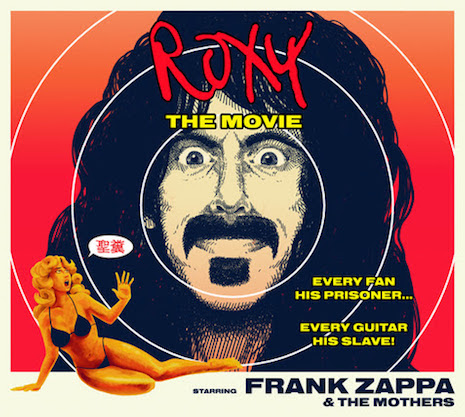 Had the privilege of seeing Zappa's Roxy movie at the Egyptian theater in Hollywood, 42 years after the shows. I give it a thumbs up! The tech guys conquered the sync problems it was plagued with at last. Highlights for me included Dog/Meat (Dog Breath Variations + Uncle Meat), Cheepnis with perc. parts only (!) very cool, Echidna's and Bebop Tango. The band was amazing! Well worth owning this one.>

There was a talk after the movie with interesting items. There was a lot of editing done, even within songs. There were 3 nights of shows, so they tried to find the best stuff. Only some of it is the same as what is on the Roxy album. Village did not make it. The album version had massive vocal overdubs, and without that help, apparently it was pretty weak, which is no surprise. I would have liked to hear Pygmy Twilight, but it is not in there. I have only 2 things I would have done differently. It starts off really slow with a long, bluesy version of Cosmik, with way too many blues changes solos. That is followed by Penguin, also slow and my least favorite song from the album. So the first 20 minutes are not so great IMHO. The rest is fabulous, up until the end with all the people dancing on stage on stage. Theatric, I guess, but it lost my interest. And I hope it was the sound system in the theater, but I could almost not hear Tom's bass at all! Too bad, because he is so great, and him playing Echidna's was one of the reasons I took up the bass! Still, all in all, I say buy it!