THE RESIDENTS - WHAT WAS LEFT OF GRANDPA 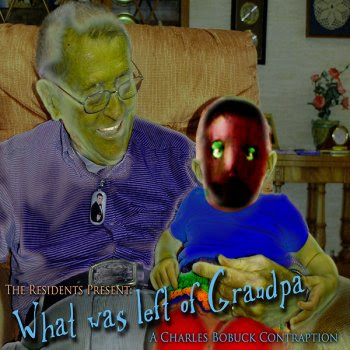 The latest Charles Bobuck contraption is called "What Was Left Of Grandpa".
Released by Klang Galerie.
Thirteen tracks.
With special guest Nolan Cook on the guitar.

"What was left of Grandpa was pretty much the same as what was right about Grandpa. He was my namesake and therefore impossible to forget, despite not being particularly memorable. What was right about Grandpa was his love of jazz, and what was left of Grandpa was his collection of 78s. Left to me, at least. He was the one who first pulled earphones over my six year old head while mumbling, "Listen to this." The headphones smelled like cigarettes. The sound, however, immediately flushed Disney tunes from my young brain. He weened me on Stan Keaton's Artistry in Rhythm and Henry Mancini's Peter Gunn. By puberty I was an absolute fan of Bob Graettinger. In high school I followed the careers of Pete Rugolo and Billy May as closely as my peers followed Peter, Paul & Mary and Ray Charles. Grandpa Charles would not think this album jazz. But I do. Here it is, What Was Left of Grandpa." The wonderful new album by Charles Bobuck, composer of The Residents. A beautiful mixes of styles, melodies and ideas. Featuring guitar work by Mr. Nolan Cook.