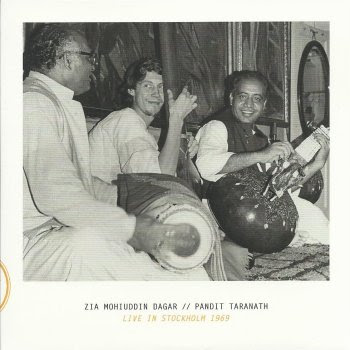 The Swedish Country and Eastern record label is known for releasing excellent jazz albums as well as adventurous albums with Indian music.
One of the more recent releases is a recording of a private concert that Z.H. Dagar and Pandit Taranath did at painter Axel Törneman's atelier in Stockholm in 1969. A concert that had been arranged by Bengt Berger.
Z.H. Dagar plays the rudra veena and Pandit Taranath plays pakhawaj.

Bengt Berger adds:
In 1969, on their way back to India from their first time in US, guruji Pandit Taranath Rama Rao and Ustad Zia Mohiuddin Dagar stopped by me in Stockholm for a few concerts, a radio show and a TV appearance. They recorded one been piece and one short pakhawaj solo (its a rare thing to see Ustad put tal). I have not found the rudra veena piece, BUT I HAVE FOUND THE PAKHAWAJ SOLO, filmed in very high quality and here it is! Jai Guru!