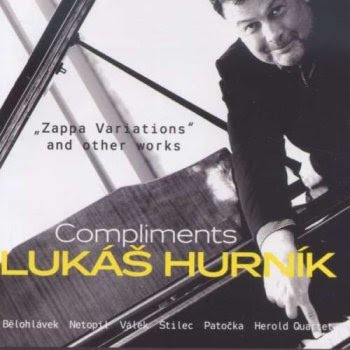 Lukáš Hurník (born in Prague in 1967) : composer, graduated from Charles University with a degree in Music Studies. He learned to compose from his father, composer Ilja Hurnik. He works as director manager of Czech Radio 3 - Vltava, and is mainly concerned with musical education programs. In 1990 his composition Hot-Suite for piano duo won first prize at the Piano Duo Association of Japan contest. His compositions have been awarded a number of honors at Czech and international competitions. A strong rhythm and melody and polyphonic voice parts are typical of Hurnik's synthesis. The author does not feel a need to seek out ever new means of expression at all costs. Rather, he enjoys using a traditional approach to describe new content in an interesting context.

January 14, 2004, the Pražskou Komorní Filharmonii, conductor Jiri Belohlávek and soloists Katerina Stupková and Pavel Fiedler, performed his "Variace Na Lumpy Gravy" (Variations On Lumpy Gravy (Frank Zappa)).
The performance, as well as a sequencer version of the piece were released on CDR by the Czech Zappa Fan Club in 2005.

Finally, this superb Zappa tribute gets an official release on "Compliments". Recorded in conert on January 19, 2004 at the Czech National Bank Hall.
Philharmonic (Variations On) 'Lumpy Gravy'.
I Love it.