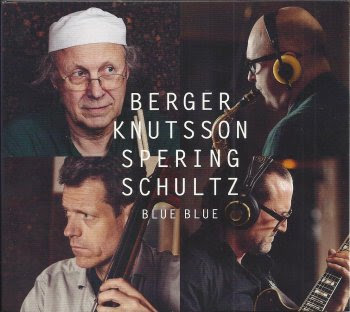 For their latest album, drummer Bengt Berger, saxophonist Jonas Knutsson and double bass player Christian Spering invited jazz guitarist Max Schultz.
The Berger / Knutsson / Spering trio was founded around 1996. They have been performing and recording as a trio for years.
Max Schultz also hails from Sweden. He has performed and recorded all over the world. Only recently, he released "Dedications", an album that he made with fellow guitar player Erik Söderlind. It included a fine version of Frank Zappa's 'Blessed Relief'.

Earlier this year, Bengt Berger, Jonas Knutsson and Christian Spering asked Max Schultz to join them with the goal of recording an album. The four of them got together for two days in May 2015. The result is beautiful and it's called "Blue Blue".
These guys sound like they have been playing together for years. And it's not just the playing. Each musician contributed compositions as well, resulting in a nice reflection of the participants.

"Blue Blue" presents a fine, mellow mixture of blues and jazz. There's some great music on 'Blue Blue', but my favourite tune is the opening track, 'Frankly'. Written by Max Schultz and an obvious tribute to the music of Frank Zappa.

Out on / Available from Country and Eastern,
http://www.countryandeastern.se/