Friday, July 17 2015, Drei Vom Rhein opened the Zappanale festival in Bad Doberan, Germany.
True, the party had already started one day earlier in the centre of Bad Doberan where Napoleon Murphy Brock and Mats Öberg had played an incredible set of Zappa music, but Friday was the day to get the ball rolling over at the festival ground.

The band played an amazing set. Every song got a special treatment. One suprise after another.
I loved it.
Next to the Zappa themes, the set included 'Francesco', a fine Zappa tribute (written by Werner Neumann).

The concert was made available on DVDR at the festival. 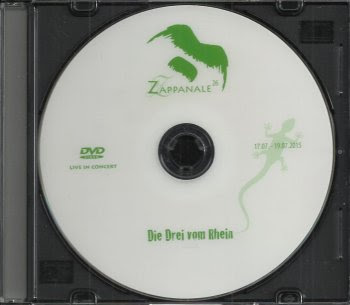 This was a fabulous opening concert for the festival.
I was glad that it got captured on video.
Later the same day, I found out that the band had just released a new album, "Francesco". I didn't hesitate for a second and took a copy home. More on that very soon.

Here's a sample from the 2014 Leverkusen concert to show you what it was like :