THE RESIDENTS - THE RIVERS OF HADES 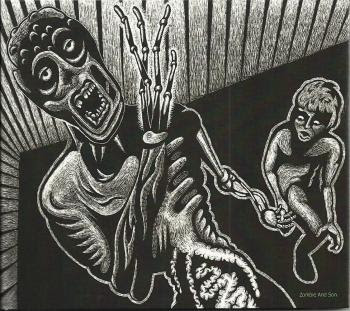 "The Rivers of Hades was part of an aural art piece to accompany the release of The Residents action figures which had been designed by Steve Cerio.
The original music was conceived to utilize two DVD players that were programmed to randomly play abstract bits of music.
The project (which required 12 speakers placed in a circle around the gallery) was entitled 'Chaos Is Not Just A Theory'. In Greek mythology, Hades was a child of Chaos.
As these kinds of things go, it never quite worked out. The gallery never agreed to provide the sound system and some people felt it would be unpleasant for attending guests so by the time the toy release actually happened (there were several lengthy delays) The Residents had lost interest and had moved onto other projects which did not allow them to even attend the toy release opening.
However, Homer Flynn, Leigh Barbier, and Steve Cerio did attend and showed non-Residents art work. "
(notes from release)

Previously released as download-only from the Rez Robot Selling Device.