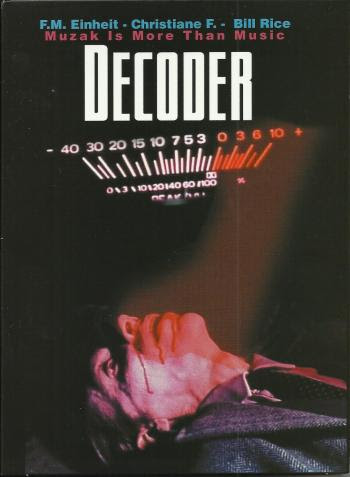 The Transparency label isn't afraid to take a risk. Last year, they released "Decoder", the 1984 German cult-film that was based on the writings of William S.Burroughs.
The movie features Genesis P-Orridge (Throbbing Gristle), F.M. Einheit (Einsturzende Neubauten), Christiane F (Shellshock), and Bill Rice.
The package consists of a double layer DVD (movie & extras), and a CD (with the soundtrack).

The movie is about audio experiments. A group of 'pirates' adds some sort of musical tranquilizer in muzak, forcing people to fall asleep when they hear it. Big Brother isn't happy and tries to stop them, leading to some sort of huge riot.

Here's what the info says:
"DVD features include a beautiful color-rich transfer of the film with newly translated English subtitles, the original trailer, a slide show of 75 still production photos by Ilse Ruppert, a documentary on the Italian 'Decoder Collective', a 46-minute audio interview with filmmaker Klaus Maeck, rare footage of Derek Jarman filming Burroughs on set, and Berlin riot news footage used in the film with a music loop by Genesis P-Orridge commissioned specially for this DVD release.
The soundtrack CD features Soft Cell, early Einsturzende Neubauten, Matt Johnson (The The), Dave Ball and Genesis P-Orridge, and William Burroughs. A lot of the music on the CD is not in the film and vice versa. NTSC all region, full screen format. 87 minutes."