THE PAUL ROSE BAND - LIVE AT THE BROKEN DOLL 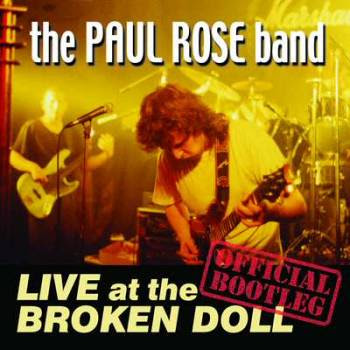 "Live At The Broken Doll" is a free download from Paul Rose's website. I mentioned the album on this blog yesterday. Unfortunately, the downloading didn't work out, so I mailed Paul and asked if the album was still available.
Apparently, the files had been erased from the server, but Paul said that he would put them up again.

So here it is, for your (and my) enjoyment: "The Paul Rose Band: Live At The Broken Doll".
Rated 'Official Bootleg', you know that you shouldn't expect the best audio quality, but that should not withhold you from downloading this album.
A great concert.

The Paul Rose Band played some raw and catchy blues songs that night.
Melodic blues. All instrumental. That's the way I like it.
And hidden in the setlist was Frank Zappa's 'Black Napkins'. A great rendition and fitting in perfectly.

And some of you might even want to know that Paul talks in lenght about this recording on two of his poscasts. Temporary available from Paul's website as well: