THE EX - AT BIMHUIS 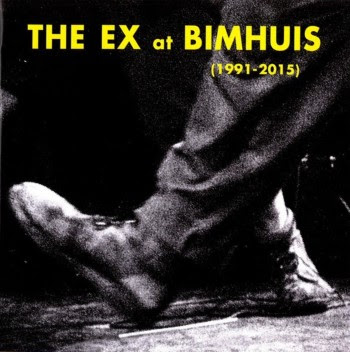 Here's an album that I discovered only recently and I'm very glad that I did.

The Ex are a Dutch underground band that consists of Terrie Ex, Andy Moor, Katherina Ex and Arnold de Boer. Former memebers Luc Ex played the bass from 1983 until 2002 and GW Sok did the vocals from 1979 until 2009.
The Ex started out as a punk band but evolved into an experimental / improvised music ensemble. Over the years, they have worked and performed with Mats Gustafsson, Han Bennink, Jaap Blonk, Han Buhrs, Tom Cora and Joost Buis, to name just a few.

On a side note, Luc Ex (Luc Klaasen) started Rubatong after he had left The Ex.
(Luc Ex, René van Barneveld, Zlaya Hadzic, Tatiana Koleva and Han Buhrs). They released one superb album (in 2011).

The "At Bimhuis" 2 CD set collects live material from performances at the 'Bimhuis' jazz club in Amsterdam, NL with material from 1991 to 2015.
This is sublime.