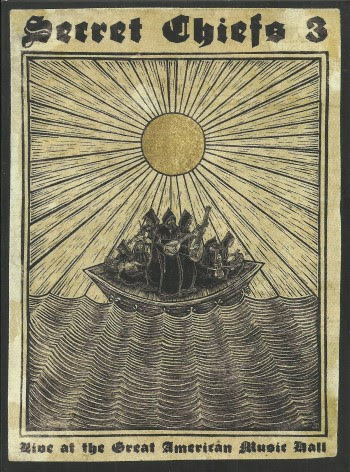 Adding data to the Secret Chiefs 3 discography.
"Live At The Great American Music Hall" got released in 2009.

From Midheaven.com :
Live at the Great American Music Hall captures Secret Chiefs 3 in concert with what many consider to be the best of their many lineups in 14 years of playing. Shot in 2007 at one of the band's favorite haunts, this DVD does justice to a group whose live energy usually exceeds the recorded medium. Renowned for their ultra-elaborate CD productions, Secret Chiefs 3 has also garnered a reputation for the power and immediacy of their live shows. Their fanbase has swelled in recent years and grown accustomed to this live incarnation (the Secret Chiefs 3 bootleg scene is thriving), and they demand an official release! Not just some audience-hand-cam and stereo-mic-job thing, this DVD boasts a pro six-camera shoot with live sound mixed by Billy Anderson, with the multi-channel outs mixed for DVD by Trey Spruance and Randall Dunn (producer of Earth, SUNNO))), Kinski, Wolves in the Throne Room, etc). And it comes with a really nice six-panel gatefold digi-pack with original artwork.