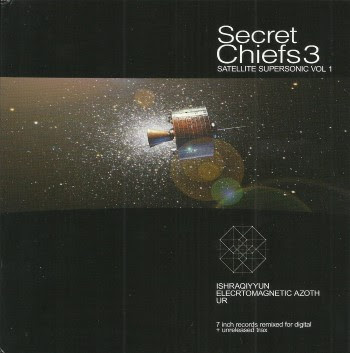 Listening to experimental collective Secret Chiefs 3 always is an adventure. Led by Trey Spruance (Mr Bungle, Faith No More), the band records an tours with different line-ups and even under different names.
The 2010 album "Satellite Supersonic Vol 1" is sort of a compilation. It collects material from different Secret Chiefs 3 ensembles (satellites) that had only been released on 7" vinyl. The exceptions: one different version, one unreleased track, and one track that had only been released on a sampler.

The band will be in Ghent on November 9, 2018, to celebrate "John Zorn 65".
Next to Trey Spruance, the SC3 septet will feature a.o. Eyvind Kang on violin and Ches Smith on drums