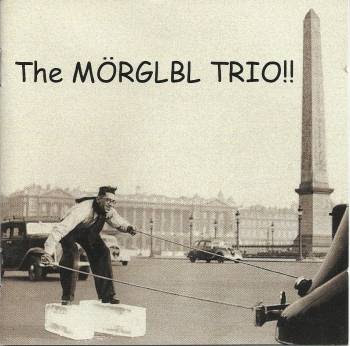 In 1998 The Mörglbl Trio recorded its first album: Ivan Rougny on bass, Jean-Pierre Frelezeau on drums and the fabulous Christophe Godin on guitar.
Later, The Mörglbl Trio changed its name to Mörglbl. The band played at Zappanale in 2007. The festival had already featured Christophe Godin in 2002 when he had teamed up with Pierrejean Gaucher for one of the best gigs in Zappanale history.
Christophe Godin does have this thing with unpronounceable names as he also perfoms with Gnô, and with 2G.

"The Mörglbl Trio" was the trio's first release. It was a private release and you should consider the album as rather hard to find. The music on the album is great. Instrumental, guitar-orientated rock music. Right up my alley.

Here's some "2G" for you: Christophe Godin & Pierrejean Gaucher.