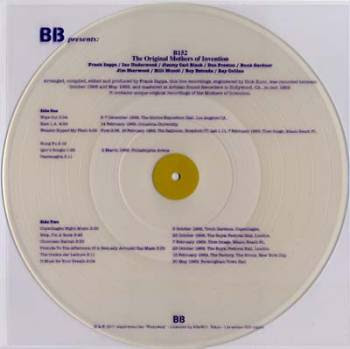 The italian B13 label is known for its bizarre and mysterious releases. B13 has released some pretty rare stuff, including some fine live jazz music: Miles Davis, Pat Metheny, Jaco Pastorius, and more recently even two Sun Ra albums: "Live At Storyville".
Most of these are limited vinyl releases. On coloured vinyl. In a clear plastic sleeve.
They do look pretty neat.
And here's their latest one: "FZ At Artisan", taken from a recently found demo / acetate album.

"Recorded live between October 1968 and May 1969, these tracks were chosen, produced and mastered by Frank Zappa himself at Artisan Sound in Hollywood, CA in mid-1969. FZ At Artisan includes rare live versions of tracks recorded during the Mothers' first European tour (Autumn 1968) and at various locations around the USA (mostly in 1969, the year Zappa broke up the band for the first time). Several of these songs were eventually released on the LPs Weasels Ripped My Flesh and Burnt Weeny Sandwich." 140 gram vinyl. Clear vinyl in transparent PVC sleeve with purple lettering. Limited edition 500 copies."
Geplaatst door UniMuta op 12:22 PM