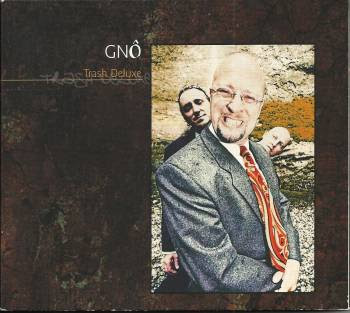 Guitar wizard Christophe Godin cannot be pinned to one band or to one musical genre. With Pierrejean Gaucher, he toured and recorded as G2, performing pop and rock tunes in jazz arrangements. With his Mörglbl band he brings progressive rock music: amazing technical abilities combined with a fine sense of humour.

And then there's Gnô.
On his website, Christophe describes Gnô as playing heavy metal pop music. On "Trash Deluxe", does indeed gets treated to a nice set of pop songs, but with a nice layer of heavy vocals and guitars.
Gnô has a second, new album out as well, but I thought I'd start with adding "Trash Deluxe" to the U.M.Archives.

For a taste, you might try this little youtube video, but keep in mind that the one with the camera was standing in front of Christophe's amplifier...