DWEEZIL ZAPPA - LIVE - 'IN THE MOMENT' 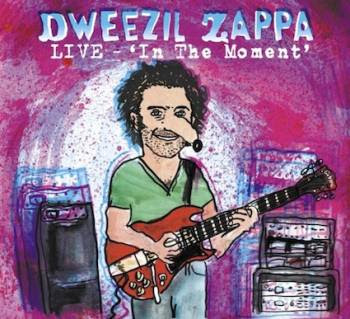 "Live - 'In The Moment' " is a collection of guitar solos by Dweezil Zappa, recorded during recent tours with his Zappa Plays Zappa project.
This means that you get almost thirty guitar solos on pretty recognisable vamps. As you probably know, Dweezil has put a lot of time and effort in getting the right tone and the right sound for his guitar in the ZpZ band, and the result sounds very good.
Sure, there's more to tone and sound to play a good guitar solo, but the air sculptures that I heard sounded quite good.
Dweezil succeeded in recreating the atmospheres of a Frank Zappa guitar solo.

I've seen the ZpZ in concert on a number of occasions already, and at a number of these, I felt that DZ actually nailed FZ's guitar playing. "Live - 'In The Moment' " collects the best of these moments.

Here's an impressive tribute to the best guitar player I ever heard.