CRACKED LATIN - ALONE WITH YOU 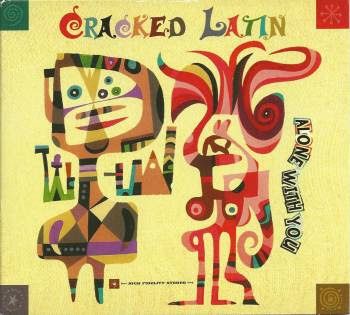 Cracked Latin, the crazy duo that's made up by Lane Steinberg and Luis Accorsi, has a new album out. After listening to their first album "The World Is Cracked Latin" a year ago, I hope that this would not be a one-album stint. This was just too good.
And now there's "Alone With You" (stress 'alone'). The album presents 12 twisted pop/latin songs that you will hum along immediately. Great songs, fun to listen to, and displaying impressive craftmanship. The album cover (Jim Flora!) gives it all away.

One of the tunes on "Alone With You" was co-written by R.Stevie Moore, who also contributed guitar & strings to the track. Beautiful.

The perfect album to get you in a good mood.
http://www.crackedlatin.com/

Here's a track from their previous release, also on Transparency. It should give you an idea of what Cracked Latin is about.