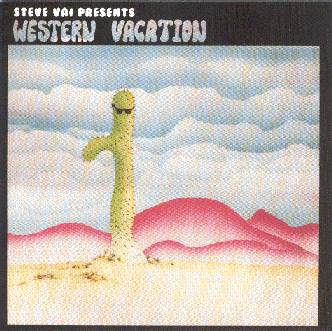 When Steve Vai went on tour in 1985, he told his friend Marty Schwartz that he could use his Stucco Blue Studio. At the time, Steve, Marty and a couple of others where sharing a house in Sylmar, California. The CD-booklet says that Marty lived in what once had been the garage (of which he had made a loft).

For the recordings, Marty got support from former Zappa bandmember Bob Harris and Bob's wife Thana. Bob not only took care of the vocals but wrote some of the lyrics as well.
Besides Marty, Bob and Thana, the core band featured Chris Frazier on drums and Jac Mihanovic on bass.
The result is a remarkable album. Excellent compositions with lots of nods to Zappa: playful melodies, great rhythms, ...
It's also astonishing how much it sounds like Steve Vai's "Flex-Able" album, or like Bob Harris's "The Great Nostalgia". But then again, they were all living in the same place and as Steve says in the liner notes: "We were all about music all day".

"Western Vacation" also features some remarkable guests: Tommy Mars' typical synthesizer sound is all over the album, Scott Thunes provided bass for one track and Steve Vai recorded the guitar solo for the title track while on the road.

"Western Vacation" is an album that you have got to hear.
Essential listening!