French collective LeBocal made a beautiful Frank Zappa tribute album (in 2003). Especially the fine arrangements and the great dynamics stand out.
The band will be performing at Zappanale 2010, and will be playing two concerts!
Time for some questions. 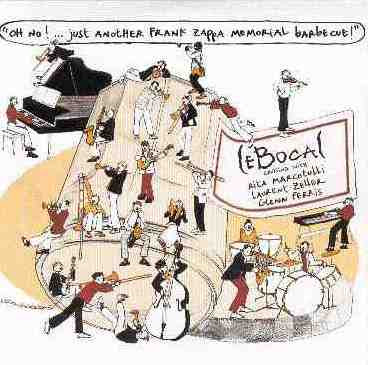 UniMuta: The “Oh No... Just Another Frank Zappa Memorial Barbecue” album was released in 2003. Has the ensemble had many opportunities to perform these pieces live?

LEBOCAL: Oh yes, the band has performed the Zappa repertoire in France and abroad on numerous occasions. We have performed in cultural centers, in jazz clubs, and at festivals. We’ve performed in Switzerland, in Africa (Senegal), and earlier this year in Bremen, Germany, at the Jazzahead Festival.
One of the most memorable ones was with guitar player Nguyen Lê in Albertville.

UniMuta: The collective will be doing two concerts at Zappanale: the first one on Saturday, the second on on Sunday. Can you already give us some details? Will these concerts be different?

LEBOCAL: The Saturday concert will be an acoustic one. It will be in close proximity to the public. The setlist has not been established.
On Sunday, we’ll have the full blown, amplified concert. Liberating all the concentrated energy, ...

UniMuta: Sounds like two concerts I don’t want to miss.
Zappanale is a rather particular festival. There’s a great atmosphere, and people really come to listen to the music. Are you ready to do another festival?

LEBOCAL: LeBocal is used to play at festivals. We’ve already played for huge crowds: in Genève we played for almost 1000 people. Bremen had a crowd of about 800 people.

UniMuta: This is something that I’m really looking forward to. "Oh No... Just Another FZ Memorial Barbecue" is a fabulous album. I’m really curious to find out what it will sound like live.
Thanks & see you at Zappanale soon.

LeBocal will be playing at the Zappanale Festival in Bad Doberan, Germany, on Saturday, August 14, 2010, at noon, at the Truckstage, and on Sunday, August 15, 2010, in the early afternoon, on the Main Stage.