OINGO BOINGO - NOTHING TO FEAR 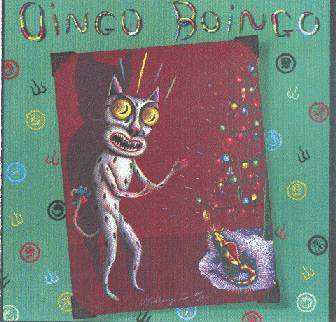 Wiki says:
"Oingo Boingo was an American new wave band. They are best known for their influence on other musicians, their soundtrack contributions and their high energy Halloween concerts. The band was founded in 1972 as a performance art group called The Mystic Knights of the Oingo Boingo, and from 1976 it was led by songwriter/vocalist Danny Elfman, who has since achieved substantial renown as a composer for film and television.

The group's format changed twice. In 1980, it changed from a semi-theatrical music and comedy troupe into a ska-influenced New Wave octet and shortened their name to Oingo Boingo. In 1994, the band reshuffled its lineup, adopted an alternative rock sound and rechristened themselves Boingo. The band retired after a farewell concert on Halloween 1995, having reverted to the name Oingo Boingo for the concert."

I just bought the album for the beautiful cover, and, yes, that's the same Danny Elfman who wrote The Simpsons' theme.
And "Nothing To Fear" has some great music.