THE ENSEMBLE AMBROSIUS AT THE NEXT ZAPPANALE

I know people who regard the Ensemble Ambrosius' "The Zappa Album" as one of the best albums of a band or ensemble that performs the music of Frank Zappa. I agree.
The Ensemble Ambrosius is scheduled to open the 2010 edition of the Zappanale festival with a concert in Hamburg. The ensemble will also perform at the festival itself. I took the opportunity to ask Olli Virtaperko a couple of questions
. 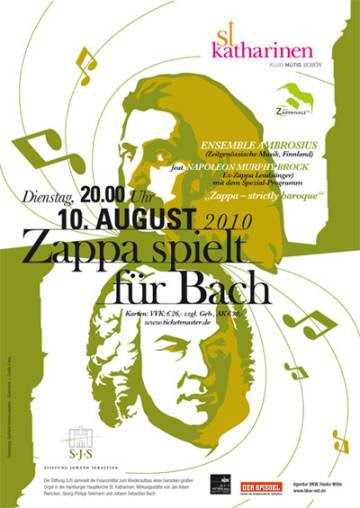 UniMuta: You released your "Zappa" album in 2000. It's a fabulous record on which you perform Zappa's music on baroque instruments. I know that you performed it in concert at the Umea Festival in 2003, and I saw you performing it in Brugge, Belgium, in 2004. Do you get many occasions to perform?

Olli Virtaperko / Ensemble Ambrosius: During the past few years we've been performing only occationally. In 2005 we did a one-week tour in Sweden and in 2007 some concerts in Finland and one in St. Petersburg. That's about it for touring. There's not very much demand for an ambitious 7-piece group that plays weird music with unconventional instruments.

UniMuta: How does the Ensemble Ambrosius work? Is it an ongoing project? Do you have regular rehearsals, or is it project-related?

Olli Virtaperko / Ensemble Ambrosius: We perform so seldom that the only logical way to rehease the group is to do it by project-related basis.

UniMuta: You will be performing twice at the Zappanale Festival: The ensemble will do the opening concert in Hamburg (August 10, 2010), and you will be playing at the festival in Bad Doberan on Friday (August 13, 2010). What should we expect? Will you be playing the material from "The Zappa Album"? Other material?

Olli Virtaperko / Ensemble Ambrosius: We'll have a program that consists both Zappa and my own compositions. Most of the Zappa pieces will be from The Zappa Album, but re-arranged, as we have some new instruments, such as a Finnish folk music instrument kantele, whish blends very nicely with broque instruments. However, we also plan to play some new Zappa pieces as well. And Napoleon Murphy Brock will be joining us in both Hamburg and Bad Doberan, so that brings an extra flavour to the events with some potentially surprising new repertoire.

UniMuta: Having recorded an album with Zappa material, I can imagine that you're into the music of Frank Zappa. Will you be staying the three days of the Zappanale festival & are their bands that you want to see?

Olli Virtaperko / Ensemble Ambrosius: I have not have had time to study the program properly, but the little that I've seen looks very promising. Some major Zappa musicians are partisipating the festival, so I'd imagine it will be both interesting and fun.

UniMuta: The Ensemble Ambrosius has released a second album, "Metrix", with pieces that were written by you and by Jonte Knif. Is this the new direction that the Ensemble will be taking? Will you be performing material from "Metrix" as well?

Olli Virtaperko / Ensemble Ambrosius: I would imagine some material of "Metrix" will be played, but as far as our own music is concerned I think we'll concentrate on more recent material. We will be performing 'GACH' and 'Questa storia del mago non mi convince'. Both are written by me. Stylistically those two pieces lie in the category of "modal, jazz-rock-influenced music that utilize some classical compositional approaches", but we'll also play a couple of purely "conteporay classical" pieces of mine. As far as stylistical diversity of our program is concerned I'd like to say that I like to mix things and styles within a concert program, but in individual compositions I prefere to make clear stylistical choises and stick in them - in that sense I'm a conservative-sort-of-a-personality with little interest in "cross-over" as such. My main job and passion is composing music. But I also understand that the concept of Ambrosius is built on Zappa, so it will stay as the core of our doings also in future - which is nice, by the way: it's wonderful music and great fun to play. I'm lucky enough to have lots of other compositional commissions so that I don't have to overload Ambrosius with my own music to fullfill my personal musical ambitions. I think the balance that we now have between Zappa and our own material (50-50) is fine.

UniMuta: Thank you very much Olli. These concerts are something I don't want to miss.

The dates to remember are August 10 for the St.Katharinen-concert in Hamburg, and August 13 for the Zappanale concert in Bad Doberan.
I was fortunate to hear both the 'GACH' and the 'Questa storia del mago non mi convince' pieces, and theY sound great. I hope that both of these compositions will make the program as they would fit in very nice with the Zappa material.