Since the end of 2009, ZAPPATiKA live shows have regularly featured the talents of Dutch violin-lady KE, who also has appeared with Sheik Yerbouti and ,for some years now,with Dutch FZ tribute The Foolz. She has slotted into ZAPPATIKA-World very ,very well,despite being the only girl ! (Or maybe because she's the only girl ?!) -but seriously folks,this girl can play that damn thing ! KE has now been made official "keeper of the Pony" and will join ZAPPATiKA onstage for all their main 2010 shows. 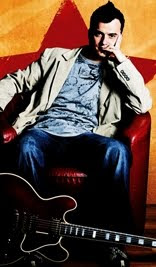 The latest development within ZAPPATiKA, however, involves the addition of a 3rd (yes THIRD) guitar player !
DADDO is a young,but gifted, Jazz Fusion guitarist/singer born in former-Yugoslavia with a penchant for good music and high level audio production. He takes to Zappa's music like a duck to water and brings a whole lot to the table when it comes to ZAPPATiKA's own compositions......the new line-up is now (Feb 2010) in rehearsal and looking forward to the getting back on stage -

"This extra melodic strength in the band,from a violin and 3rd guitar", says bandleader Mcinnes, "has brought such a scope for arrangement and sound,using midi-synth-tech, that we are doing mad stuff, lots of the crazy shit from our Dodo album too ! I am confident the 2010 show will absolutely blow your socks off ".
Geplaatst door UniMuta op 12:40 AM