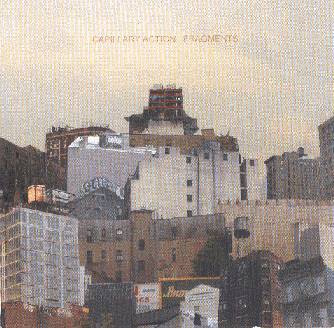 I know that I can get rather enthousiastic from time to time. Especially when it comes to music.

When listened to the latest Capillary album a couple of weeks ago, I was really impressed. Reason enough to check out their other album(s).
Here's what the web says about "Fragments":

"Capillary Action is a Philadelphia, Pennsylvania based band made up largely of graduates of Oberlin College and Oberlin Conservatory of Music. The ensemble has a widely-varying list of members centered around the constant Jonathan Pfeffer. Capillary Action's 2004 debut album Fragments was written when Pfeffer was 17 years old, and was realized mostly as a solo project, with help from fellow Oberlin students Jeff Cristiani and Kevin Alexander."

"Fragments" is an instrumental, guitar-orientated album that mixes and combines styles without rules. Heavy rock instrumentals, some jazz stuff, samba tunes, a bit of chaos and noise,... it's all there.
The album sounds quite different from "So Embarrassing". The title says it all: it's fragments, and whereas the "So Embarrassing" album sounded as one piece, "Fragments" sounds more like, well, fragments.

Did you notice that Capillary Action will be performing at the Zappanale festival, next August?
Another band that you'll definitely want to check out!