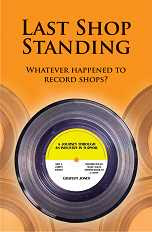 Last Shop Standing: Whatever Happened to Record Shops?
by Graham Jones
Sure looks interesting. Here's what the press release says:
Last Shop Standing lifts the lid on an area of the music industry in tatters – a sad but true tale of the decline of record shops and their beloved vinyl too. The author, Graham Jones has worked at the heart of the record industry since the golden 1980s. He was there during the fruitful retail years and has witnessed the tragic decline of a business blighted by corruption and corporate greed.

Undertaking a final tour of the last remaining independent record shops in Britain, Graham has collected a wealth of entertaining stories that explain why the best are still standing, and how the worst of them blew it.

Last Shop Standing is a hilarious, addictive, yet sometimes harrowing account written by a man who has been there and sold that. It is a book that will bring a wry smile to the face of anyone who has ever bought a music CD or attended a concert, and still has the promotional T Shirt of a favourite band to prove it.

Since getting a break into the music industry following a colleague’s failed, comical suicide attempt, Graham Jones has amassed an excellent collection of anecdotes on his travels around the record shops of Britain – all included in Last Shop Standing:

¨ The hilarity of the UK’s worst record shop
¨ The most dysfunctional family in pop music
¨ How Take That were conned out of the Christmas number 1
¨ Why Mr Blobby has a special place in the heart of record shop owners
¨ The hysterical tale of the band that faked a murder
¨ The most hyped records ever and how they cheated their way into the charts
¨ The rock star who’s hobby is touring the UK record shops being horrible to staff
¨ The shop that sold £45,000 worth of records for a fiver
Geplaatst door UniMuta op 12:38 PM