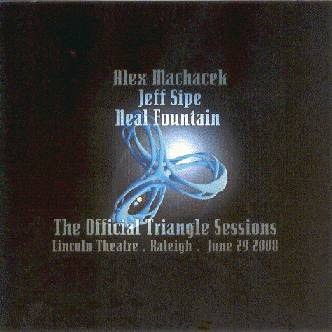 Guitar player Alex Machacek's major influences are Alan Holdsworth and Frank Zappa. He performed and recorded with Terry Bozzio and with Patrick O'Hearn, with whom he recorded the beautiful "Out Trio" DVD.
I think I also read somewhere that Alex joined, or was about to join, Eddie Jobson's UKZ project somewhere in 2008. Don't know if that really happened.

On "The Official Triangle Sessions", Alex Machecek is joined by drummer Jeff Sipe and bass player Neal Fountain.
Fusion trio. Recorded live in concert in 2008. Out on Abstract Logix.
If you're into Alan Holdsworth, you should absolutly give this a try.
Gorgeous.
Geplaatst door UniMuta op 12:24 PM