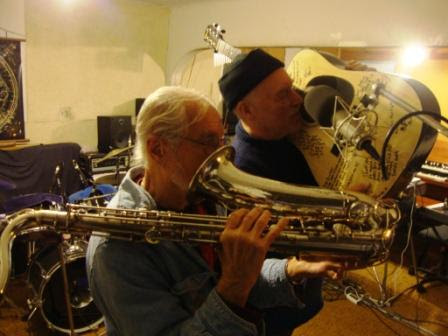 BUNK GARDNER and DON PRESTON - in an echo from the classical Mothers of Invention
recording under the piano: freaks anno 2010 talking in the sax and guitar - a must for MOI fans!
Newsbulletin from Zonic Entertainment - 2010 02 08

Last week we had some fantastic studiosessions in LA with original Mothers DON PRESTON (78) and BUNK GARDNER (77). We recorded "The Don Preston Story" as well as "The Bunk Gardner Story" - if you are familiar with the previous release "The Jimmy Carl Black Story" you know the concept.

The sessions went on very well, and both Bunk and Don were so full of interesting stories (5-6 hours each, about Zappa, the Mothers, early recordings and concerts, etc) that this is far too long to release on CD. Consequently their stories will be put directly to iTunes and other digital distributors, but with proper booklet, etc (free for album downloads). Arthur Barrow - yes, the clonemeister himself! - is editing the recordings as we speak, and they will be published asap, hopefully before June.

Don and Bunk also recorded a marvelous music session together, showing clearly that these pioneers in avant garde music, as well as audio surrealism, electronica and humour, actually play better than ever before! And their DON AND BUNK SHOW is available for booking this spring (US East coast), and summer (Europe) - highly recommendable, I can forward contact.

Today on MySpace www.myspace.com/jonlarsenguitar I have published new 19 photos from the studio sessions, including some of Don Preston's Mothers Of Invention Memorabilia - photos, postcards, posters, and even info on an unpublished audio tape of the Mothers' - in a phtoto session for LIFE magazine (the one with the babies!) app. 1967! In the blog there are also more info about the studio sessions with Don Preston and Bunk Gardner - all for your FREE Zonic Entertainment!

From these historical recording sessions, we went directly into another unforgettable recording session: new music composed and performed by TOMMY MARS - in my view the most brilliant keyboard player today, he is pure genius! This time Mars recorded new, almost orchestral music to the surrealistic story "WILLIE NICKERSON'S EGG", by yours truly. From before Tommy had already read the story, so now I only have to mix and edit the project before release. More info about this project later, but if you like "Strange News From Mars" you'll love this!

Being in LA in Arthur Barrow's lotek studio, we also made agreements about re-releases of some of Don Prestons old recordings, some of Bunk Gardner's, as well as Arthur Barrow's own - all on Zonic Entertainment. You will be kept informed.

Music Is The Best!