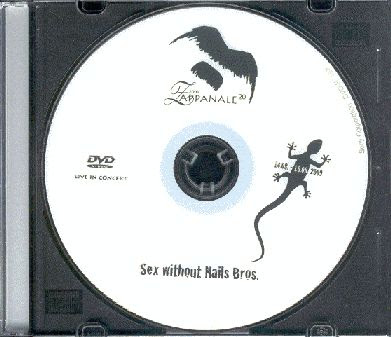 Prior to the Zappanale concert in Bad Doberan, Germany, last August, Sex Without Nails Bros. had been playing in a club in Hamburg for a couple of weeks.

I wanted to check them out, but they weren't too high on my list as I remembered from the previous times that I had seen them as being a bit too 'musical-like'. Over-acting and overdoing it...
Well, they sure proved me wrong.
I missed the first part of their set, but what I did see was great.
The sound was good, the arrangements were good, ... The band rocked, and I just love Zebo Adam's guitar tone.

Most memorable event was that they played 'Whippin' Post' and that FZ himself joined the band on a big video screen to play the guitar solo.
Wonder where they got that idea... But it fitted in nicely.

An excellent concert, and also made available on DVDR-video in a limited quantity of 20 copies.