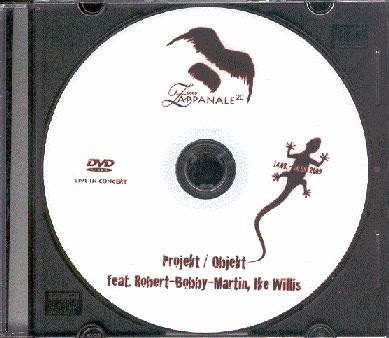 Project/Object has graced Bad Doberan and the Zappanale festival with its presence three times already: July 2002, August 2007, and August 2009.


This year, P/O brought along Ike Willis and Don Preston. It was good to see Don on the stage, and Ike was more present then ever. The secret word (or sentence) for the evening was "American, we're killing the girl tonight.". Don't know where that came from, but it sure was funny.

The Zappanale gig was great and the band brought out Robert Martin and Denny Walley for a couple of songs as well.
Another highlight of 2009. And I didn't even mention Dr.Dot who did an excellent job as Mary...

Released on vid in a limited quatity on DVDR, and made available at the festival only.
Geplaatst door UniMuta op 3:35 AM