THE ROOTS OF FRANK ZAPPA 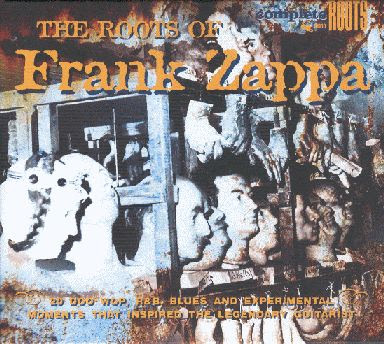 The Snapper Music label has issued a series of discs on which they take a closer look to the music that influenced certain artists.
Here's "The Roots Of Frank Zappa".
We all know that Zappa was influenced by L.A. doo-wop, by early rhythm 'n blues and by contemporary classical music. Snapper has collected a number of these rare tracks, a number of which have been mentioned by Zappa in interviews. The result is rather astonishing. Johnny Guitar Watson, Clarence Gatemouth Brown, Edgard Varèse, The Spaniels and The Paragons can all be found on this disc. And they match together perfectly.

This means that Snapper did a good job. Listening to "The Roots Of Frank Zappa" gives you familiar sounds. It's great to hear what Frank Zappa was listening to in his early years and how this influenced his musical output.
Maybe some examples of the more 'cartoon-esque' music of Raymond Scott or Spike Jones would have made this compilation more complete, but that's just a minor remark. This is a great bunch of songs.

I'm not the biggest fan of compilations, but "The Roots Of Frank Zappa" is the exception on the rule.
Recommended listening.