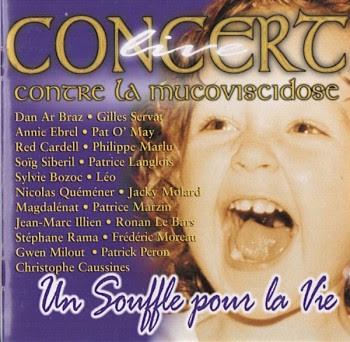 Recorded and released over fifteen years ago, "Concert Du 30 Mars 2002 - Une Souffle Pour La Vie" was a fundraiser for the battle against mucoviscidose.
The idea for both the concert and the album came from the students of the Lycée Notre Dame de Guingamp.
During the concert, FZ's 'My Guitar Wants To Kill Your Mama' was performed by Marlu (vocals), Pat O'May (lead guitar), Patrice Marzin (guitar), Stéphane Rama (bass) and Fred Moreau (drums).
It became track 9 on the album.
A fine addition to The Others Of Invention section over at the United Mutations Archives.