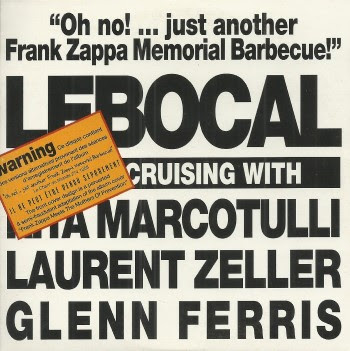 After having released a first (eponymous) album in 2000 and a second one (“Collectif Etc…”) in 2002, French big band LeBocal released an 11-track Frank Zappa tribute album in 2003. It featured former Zappa band (Grand and Petit Wazoo) trombone player Glenn Ferris and presented 11 tracks, rearranged by members of the big band collective.
A 4-track, limited edition CD EP with alternative versions and one unreleased track got issued together with the first batch of LeBocal’s Zappa tribute album.
Small print says "ne peut être vendu séparément" (not to be sold separately).
Not easy to find but a fine addition to the album.

Email ThisBlogThis!Share to TwitterShare to FacebookShare to Pinterest
Labels: lebocal, others of invention, zappa