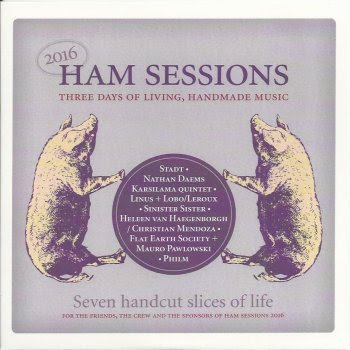 Ham Sessions is a small music festival that is held in Ghent, BE. Actually, it's held in the garden of Michel Mast to be more precise.
Three days of music. Not subsequent, although two of the three days are part of a longer weekend in May.

This year's edition is taking place right now : the previous Sunday, today, and tomorrow. I was there last weekend and had a blast.

Every year, the Ham Session team produces a promotional CD as a 'thank-you' for the participating musicians, contributors, helping hands, etceteras. This CD presents material that got recorded during the Ham Sessions concerts.

This year's edition (with material from the 2016 Ham Sessions) has Sinister Sister performing Frank Zappa's 'Inca Roads'. Nothing less than superb.
And if that wasn't enough, the album ends with Flat Earth Society (with Mauro Pawlowski) performing 'Drstkova Polevka'. Beautiful.

A limited number of copies of this album are for sale.
Contact the Ham Sessions Team through
http://www.hamsessions.be/
And tell them I told you about it.

Email ThisBlogThis!Share to TwitterShare to FacebookShare to Pinterest
Labels: flat earth society, others of invention, zappa